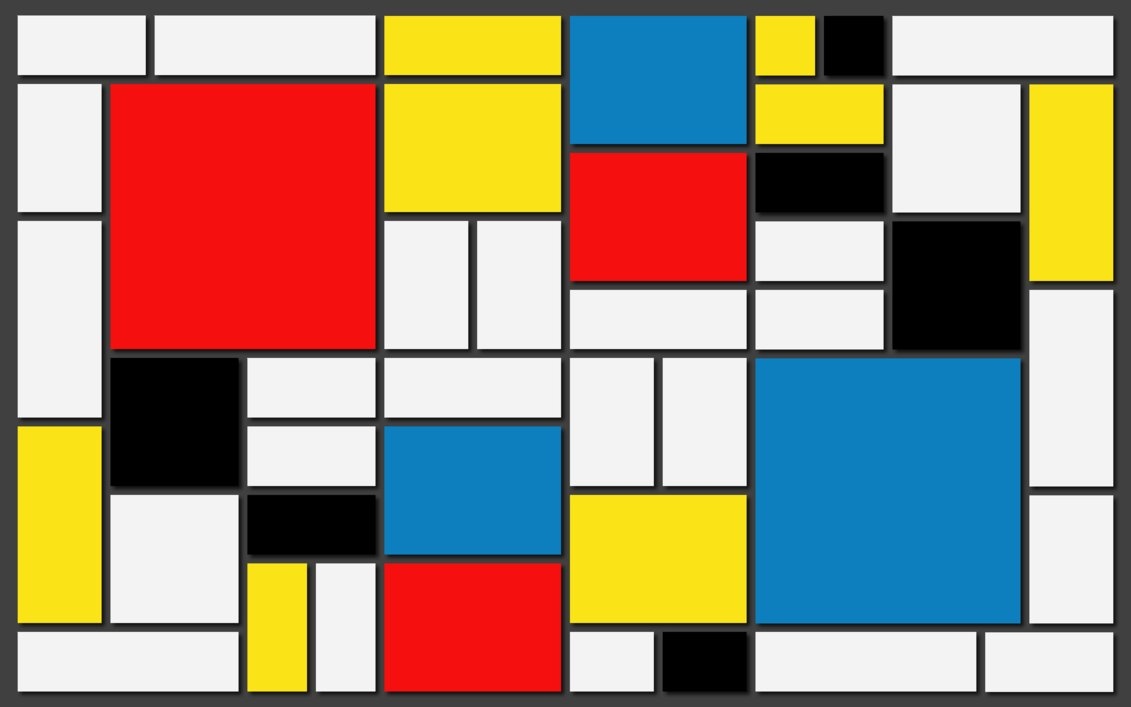 Come from the 4-armed cross

Every circle has a center (symbol 1).

By extending the radius, we obtain a first diameter (symbol 2).

There is an infinity of diameters, but only one has the particularity of being perpendicular to the first one (symbol 3).

By dividing the circle by its diameter (horizontal axis) and the perpendicular (vertical axis), we can see that they form 90° angles between them, thus forming the cross of universal tradition, long before it was taken up as a symbol by religion. 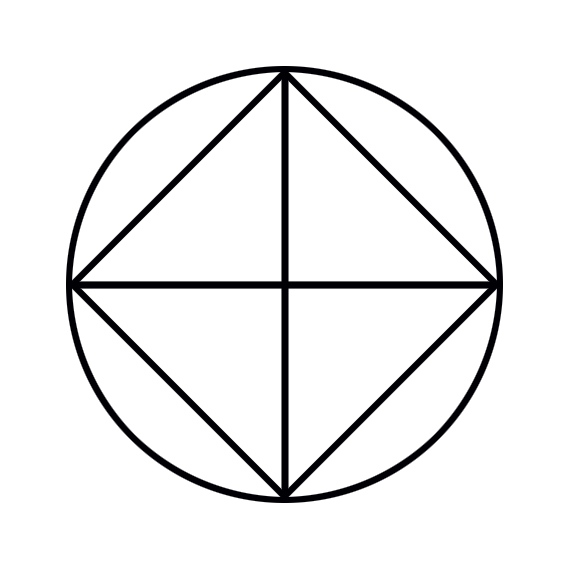 By connecting the points of the cross in contact with the circumference, we obtain a first square, called active (symbol 4).

By rotating the figure by 45°, we obtain the square, called passive (symbol 5).

This symbol of the circle divided into four equal parts evokes the cross moving around its axis. It is found in the division of time into four seasons or in the orientation of space in 4 cardinal points: north, south, east and west. It also represents the 4 Elements.

« The quaternary is represented geometrically by the square, if one considers it under the "static" aspect, but under the "dynamic" aspect, it is represented by the cross. The latter, when it rotates around its center, generates the circumference, which, together with the center, represents the denarius, which is the complete numerical cycle. »

The polygons of the square family correspond to the space and the matter which occupies it:

The square numbers are obtained by adding the odd numbers:

The pyramidal numbers are obtained by adding the square numbers: 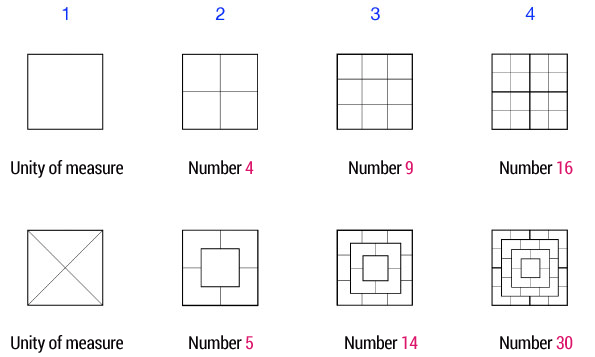 From square to pyramidal numbers

The Ancients defined the four elements in relation to the four states of matter: solid, liquid, gaseous, igneous. 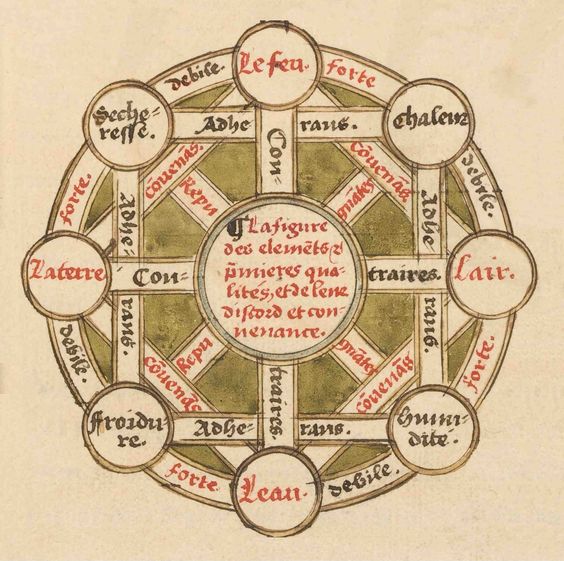 « They borrowed from the world plots of fire, earth, water and air, which one day were to be given back to it, united them together, (...) by a multitude of pegs invisible because of their smallness, and thus assembling them together, they composed from all these elements a single body for each individual, and in this body, subject to ebb and flow, they linked the circles of the immortal soul.  (...)
We call each of these bodies principles and consider them as an alphabet of the universe.»

The cut stone evokes the Masonic symbol of the "cubic stone" associated with the idea of completion and perfection, i.e. the full realization of the possibilities contained in the rough stone.

The "cubic stone" is essentially a "foundation stone"; it is therefore very "earthy", as indicated by its shape and, moreover, the idea of "stability" expressed by this same shape.

Symbolically the cube is identical to the square, the 4 is the number of the matter of the four elements.

The cube represents everything that is solidly and durably established in matter. The compact shape of the cube makes it a symbol of stability, but also a figure of the limit, of confinement, of prison. 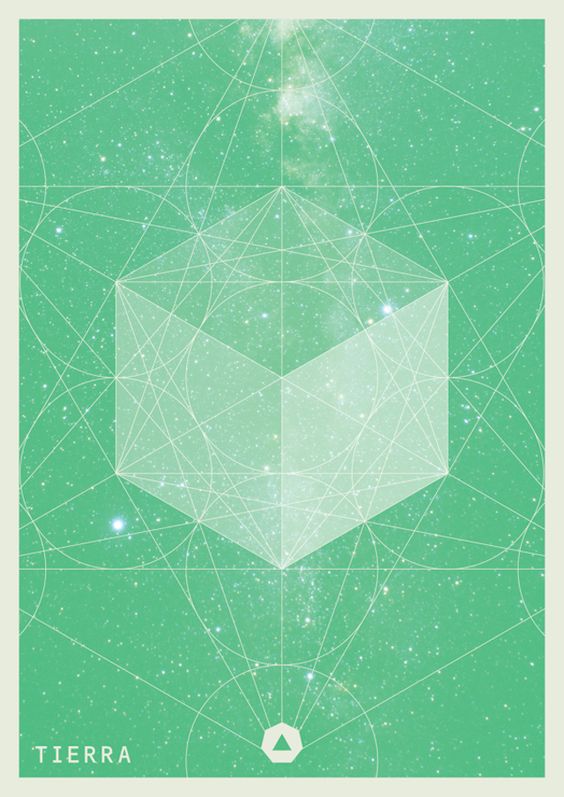 Going from square to circle is not only to associate the visible and the invisible, but it is to make the passage from the sensible to the divine transcendence. 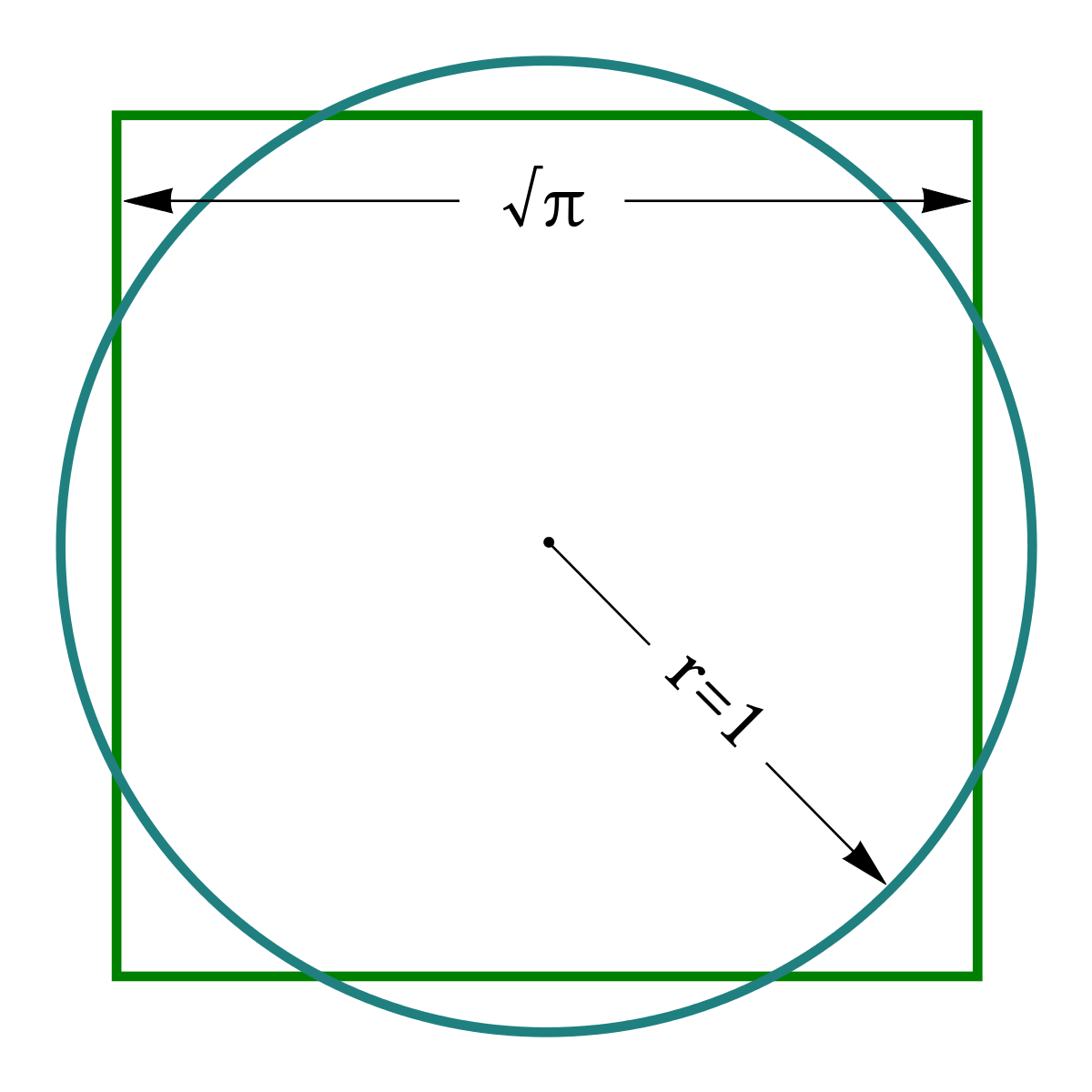 The theory of moods and temperaments

The Greek thinkers and physicians Hippocrates (c. 460/v. 370 B.C.) and Claudius Galen (131/201 A.D.) established the theory of elements that gave rise to the theory of moods.

This theory is based on the correspondence between the microcosm and the macrocosm, i.e. that the human body is a miniature reflection of the universe. Human physiology is thus controlled by the organic form of the constituent elements of the universe - fire, earth, air, water -, the quadruple root of the things that the four humours reflect.

Just as the universe is not healthy when the elements are out of balance, the human body becomes sick when there is an excess of any one of the other humours and associated emotions. Health and illness therefore depend on the balance of moods and their quality. In healthy people, the predominance of a mood is called complexion and determines temperament. To each predominant mood corresponds a temperament: bilious or angry for yellow bile, sanguine for blood, phlegmatic for phlegm and melancholic for black bile.

Temperament is essentially linked to the vital side; it is a synthesis of all the instincts, tendencies and impulses that man can hardly correct or suppress because they have their roots in his biological and physiological nature. Temperament is similar to so rather to the animal side. 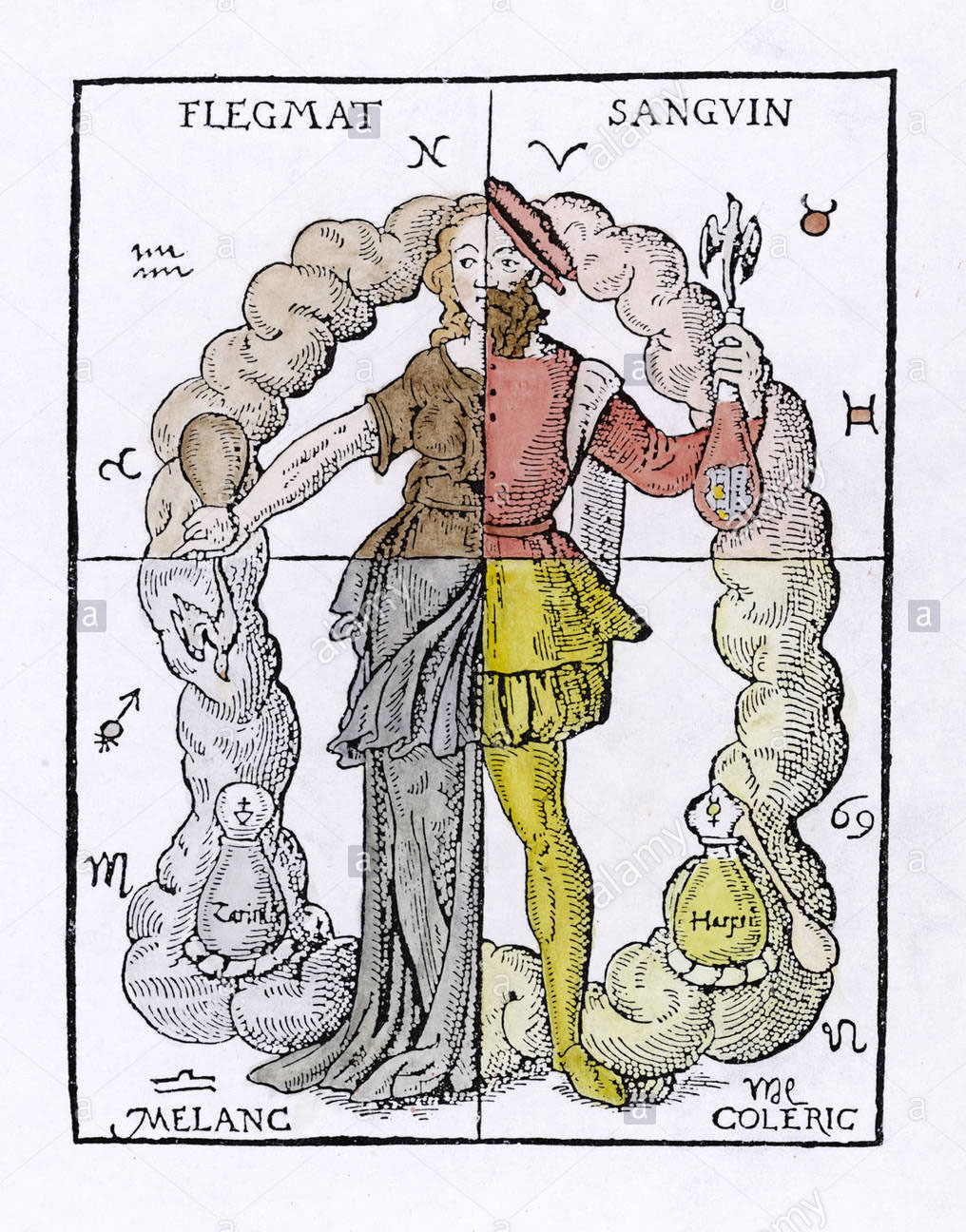 Hippocrates distinguished four kinds of temperaments: sanguine, bilious (or angry), nervous and lymphatic. But there are other classifications.

For traditional astrology, there are seven of them: solar, lunar, mercurial, Venusian, Martian, Jupiterian, Saturnian.

Square in Philosophy and Spirituality

Doubling of the square area

The Duplication of the Square in Plato’s Meno.

The problem: with a square, how can we build a new square whose area is twice the size of the original square?

The original square consists of four triangles. By shifting these areas outwards we obtain a new square is made up of eight triangles.The "test": by extending two of the lines, as shown on the right hand side of the diagram, we obtain five triangles; all with the same area.

"Menon" is one of the founding texts of the philosophy of knowledge and also the dialogue where Plato treats the idea that learning is only remembering (Theory of Ideas and
Reminiscence Theory).

It is made by drawing two horizontal parallel lines, intersected at right angles by two other parallels.

The table is thus divided into nine parts arranged in three rows and three columns, which earned it the name "tripartite board".

We have nine square boxes whose outline, partially drawn, is complete only for the central box. 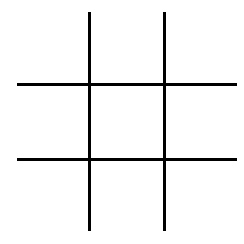 We have seen above that the numbers 1, 5 and 9 were each representative numbers of their World: 1 for the Divine World, 5 for the Human World and finally 9 for the Natural World.

Each of the worlds has a reflection in the other two.

So we have a table as follows : 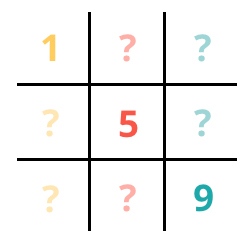 The analogy will allow us to fill in the places that have remained empty and that represent the elements to be discovered - and this in a very simple way. All you have to do is to join in each empty square the two names of which this square is the intersection. (Pythagorean table process applied to ideas).

>> The Law of Analogy

The theosophical reduction allowing to reduce all the numbers to the first nine is visualized with the help of 9 squares arranged in squares.

This arrangement, described as Cartesian, is preferred for the theosophical study of numbers.

With an abscissa axis (the rows) and an ordinate axis (the columns), it allows to assign to each number a very precise place (in reference to the system of Loci or memory of places) and easily memorizable within the archetypal matrix. 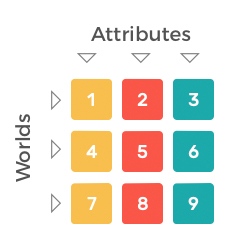 >> The three worlds through the ages