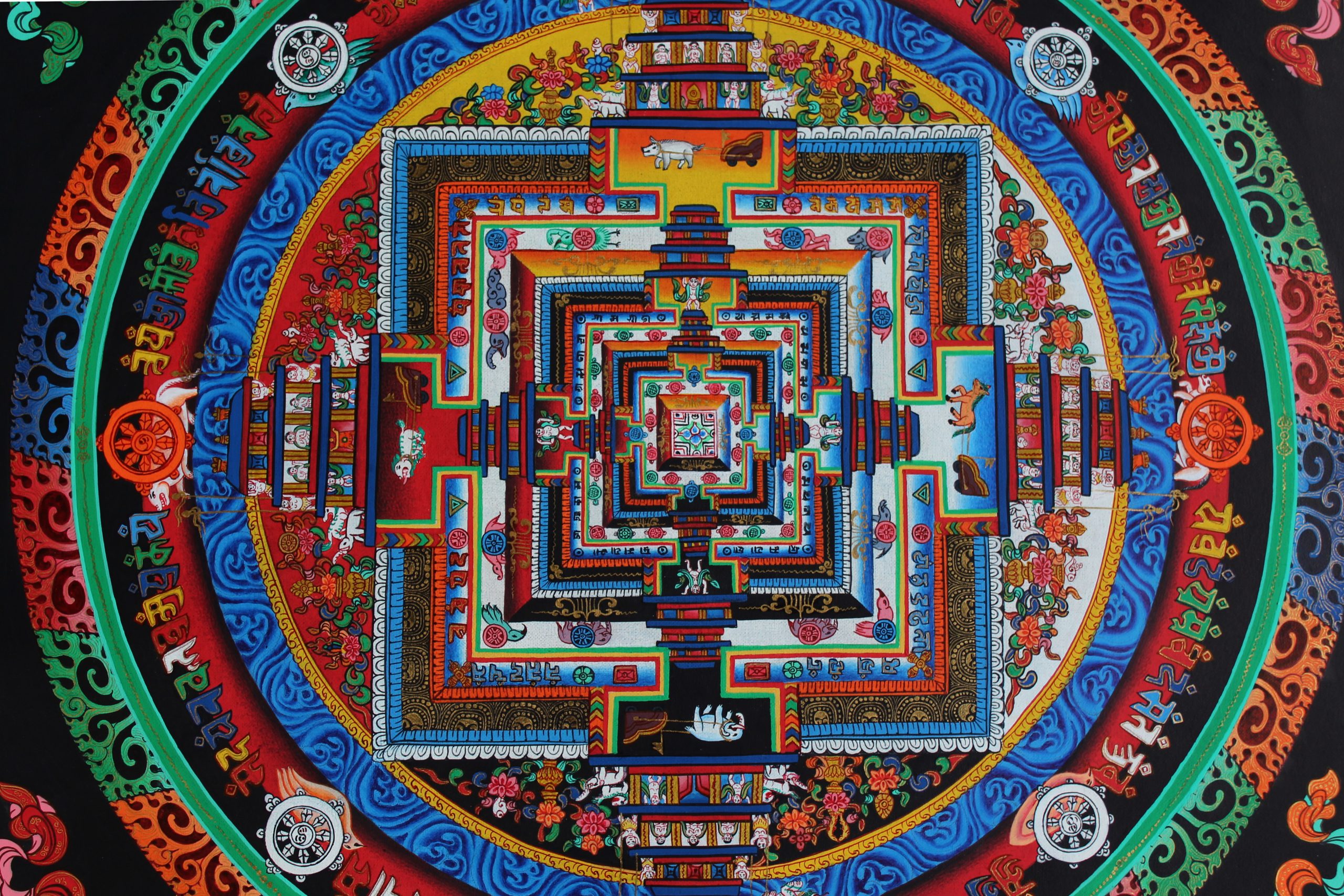 The art and the way

Etymologically, one could say that Numerology is a "discourse on numbers" whereas Geonumerology is the science of the link (Logos) that exists between numbers (Numero) and geometry (Geo).

Geonumerology is a discipline that attempts to uncover the deep psychology of an individual through the study of the lines of force present in the symbols of his name and date of birth.

The geo-numerological interpretation is based on the one hand on psychology of geometric shapes of the number and on the other hand on its location within the matrix (or tree) of the Three Worlds (Spirituality). 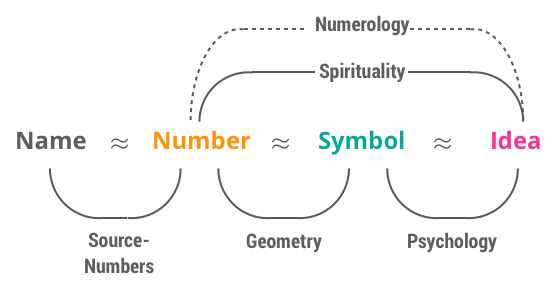 Thought brings out the idea of form, highlighting the link between mind and matter, the invisible and the visible. The symbol suggests the idea.

Unlike other symbols such as chemical symbols or musical notes, geometric symbolism is the only one that corresponds to nature itself, to the very structure of the universe.

True universal language, esoteric symbolism is like an absolute reflection of nature and its laws, not an invention.

Geonumerology is therefore a mixture of numerology and geometry.

In this way, it allows the number to be represented, to make it visible in space, to give it shape, to grasp its lines of force. It is only after having drawn it that the interpretation of the number takes all its meaning and begins to reveal its secrets.

From number to symbols

We saw previously that the number 4 had three unique geometric decompositions prior to its reduction.

By applying the existing correspondences between numbers and archetypal forms (a point for 1, a line for 2, a triangle for 3, a square for 4), it becomes possible to geometrically re-compose the number from very few elements.

>> The three grids of construction 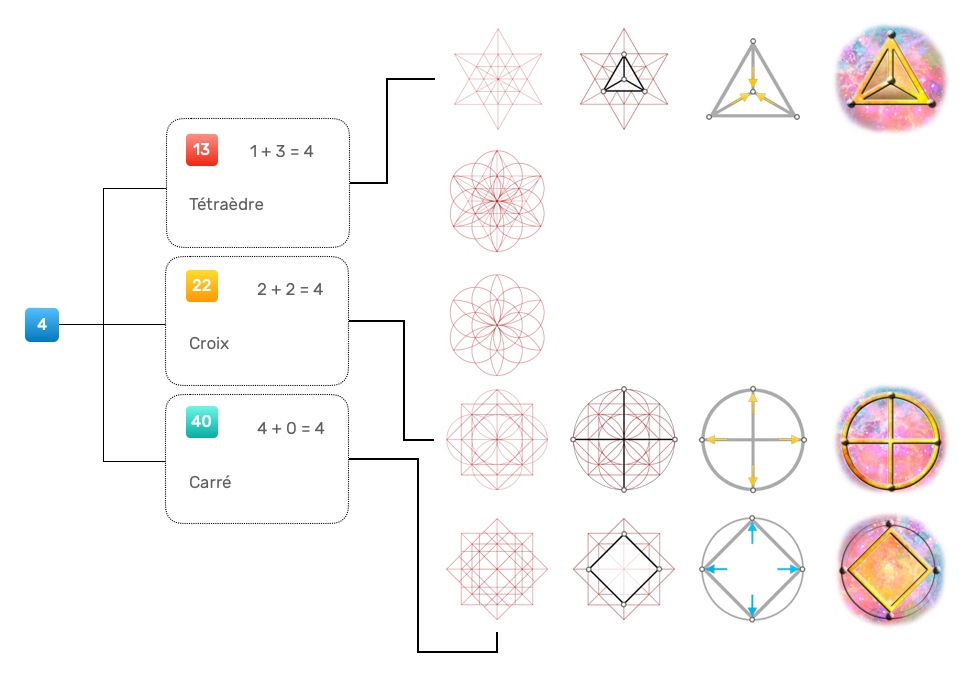 The three interpretations of number 4

The body of the symbol symbolizes the mother figure used for the drawing :

Energy is the relationship between two poles, it takes the following forms:

The Spirit of the Symbol

It is mainly characterized by the mode of perception of external events and way of processing information: 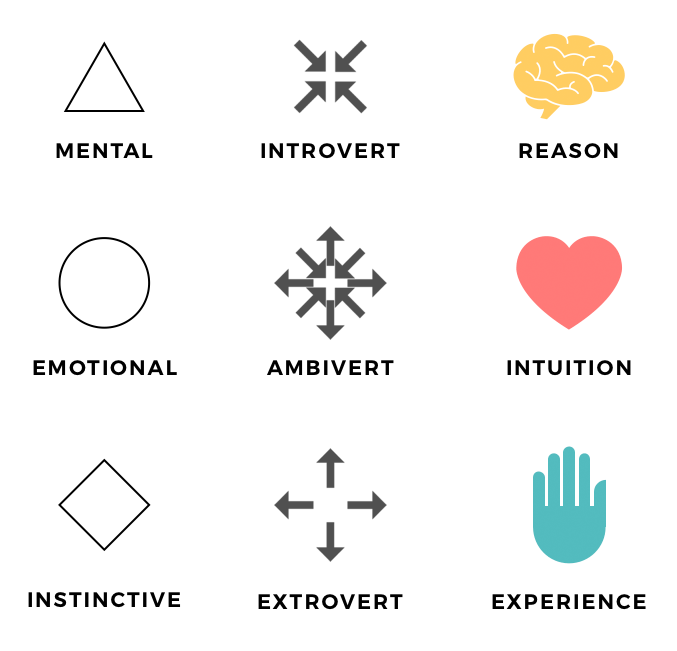 The psychological interpretation used in geonumerology is based on the comparative anatomy of the symbols in your profile.

By studying the shape of the symbol, the family to which it belongs, its orientation or its degree of composition, it becomes possible to correctly interpret the number to which the symbol is attached.

For example, the mental type (triangle) will adopt a process of evaluating facts and making judgments based on objective criteria. The emotional type (circle) is more likely to focus on personal values or what their intuition tells them. As for the instinctive type (square), this does not mean that it is a thick brute, on the contrary, the intelligence of the instinctive type is very well adapted to the business world for example.

Through these three centers, the human body captures and transforms the energy of the cosmos.

Every human being is capable of receiving, processing and transmitting information from these three centers, but during his evolution, the individual will tend to favor one of these three centers, a dominant of action which will be expressed primarily : Vital (or instinctive), Emotional or Intellectual. 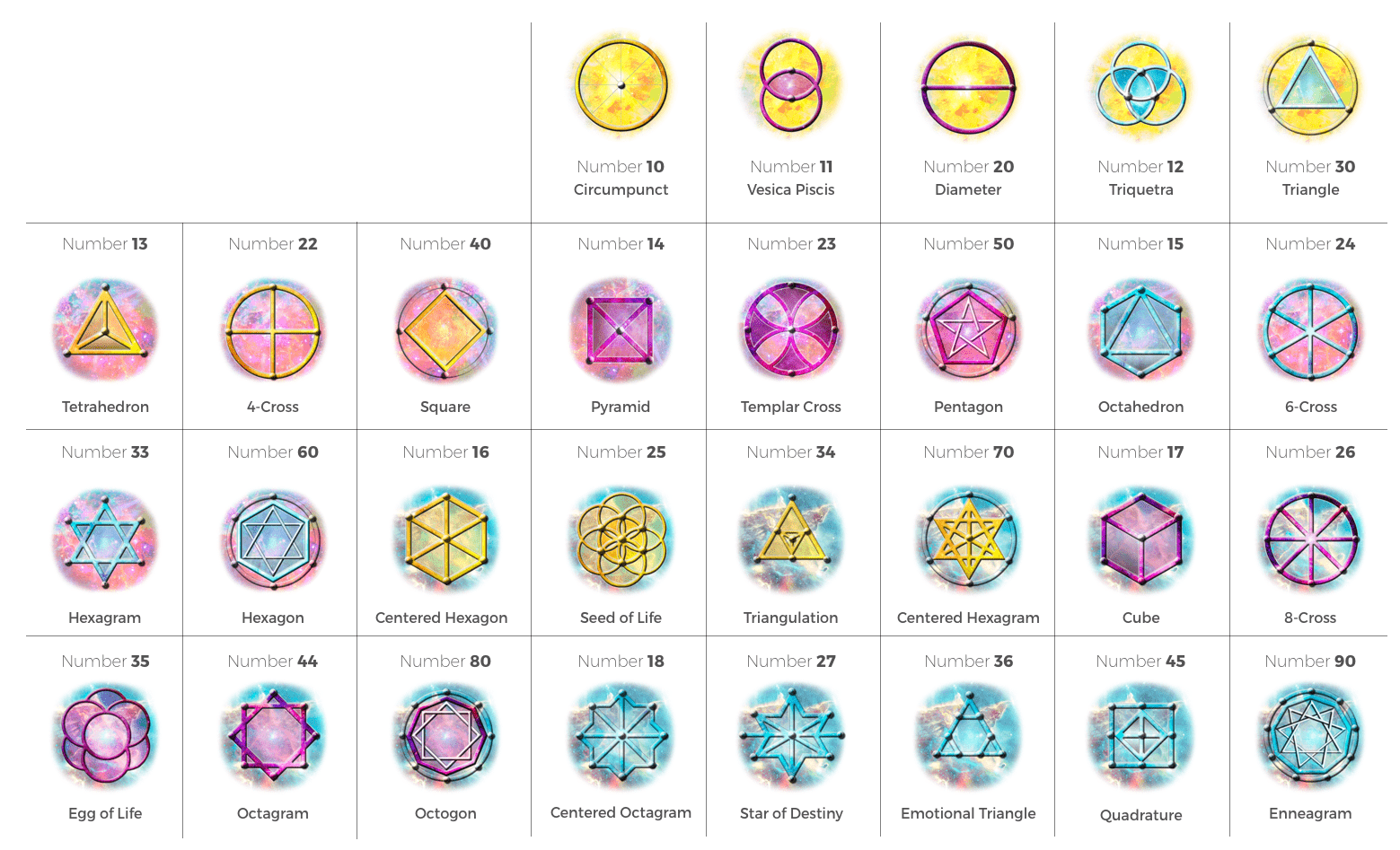 From the spirit of number to the material form

If one tries to get closer to physics one could say that the archetype acts as an attractor of any other "thought form" that comes close to it.

The vibrations emanating from each symbol tend to find another similar vibration to merge with it. All creatures, by the vibrations and wavelengths that are theirs, resonate with other beings, other entities and other forces in the universe that have the same wavelengths, the same vibrations.