From Psychology to Spirituality

"Know yourself and you will find the Universe and the Gods." 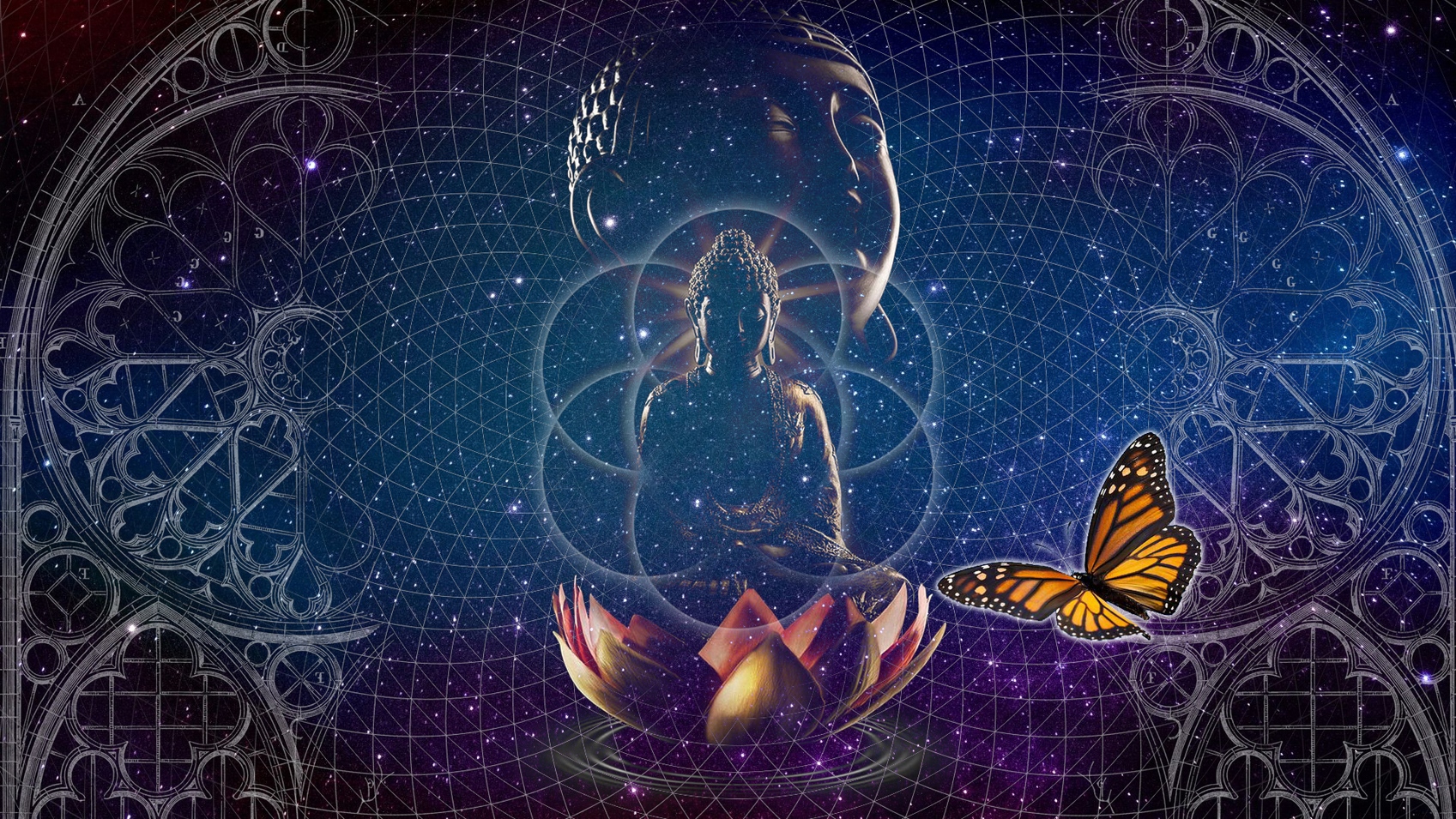 In the 6th century B.C., someone said to Pythagoras, an illustrious Greek mathematician: "You are a wise man". Pythagoras then answered: "No, I am not a wise man, I am only in search of wisdom. I am a friend of wisdom. I love wisdom. Thus was born the word philosophy.

From the Greek, the term philosophy (philos: love and sophia: wisdom) means love of wisdom. The philosopher is therefore a lover of wisdom.

The proposals and the ways have been very diverse, but the characteristic of the classical approach is the need to bring together the mind, the feelings and the body. Beyond the multiplicity of paths, it is the common point that links them all: thinking and acting in the same direction.

"The ternary division is the most general and at the same time the simplest that can be established to define the constitution of a living being, and in particular that of man, because it is well understood that the Cartesian duality of "spirit" and "body", which has in some way imposed itself on all modern Western thought, could in no way correspond to reality."

What is ancient philosophy?

1. The notions of Logos and Cosmos

The Greek word logos has many meanings. It comes from the Greek legein, which means to gather, to unite, to collect. By extension, it refers to reason, speech, language, which link things together and make their relationships appear.

It is appropriate to give birth to oneself. This is Socrates' essential contribution to the philosophy of the West, maieutics.

If it is appropriate to look back on oneself, it is with the aim of carrying out a true work of self-transformation, which is both a transformation of one's life and one's relationship to the world.

« The source of all goods is wisdom, and wisdom begins with self-knowledge. »

Man and the three worlds

From ancient China to Greece, from Siberia to the Christian world of the pre-Columbian Maya to Pharaonic Egypt, the common denominator of all Traditions is that of an esoteric constitution of man based on a ternary structure of the Universe.

Man is in this vision considered as a "microcosmos" or Small Universe, and has in itself the same organizational structure as the Universe, the "macrocosm".

The Cosmos is a notion invented by Pythagoras to translate an organized whole whose harmony is regulated on the principle of proportion.

The universe consists of a body and a soul. The Body of the World comes from the combination and the proportioning of four elements: it first took fire (without which nothing is visible) then earth (without which nothing is solid) and to unite them in proportion, it took two means, air and water, so that what fire is to air, air is to water and what air is to water, water is to earth. 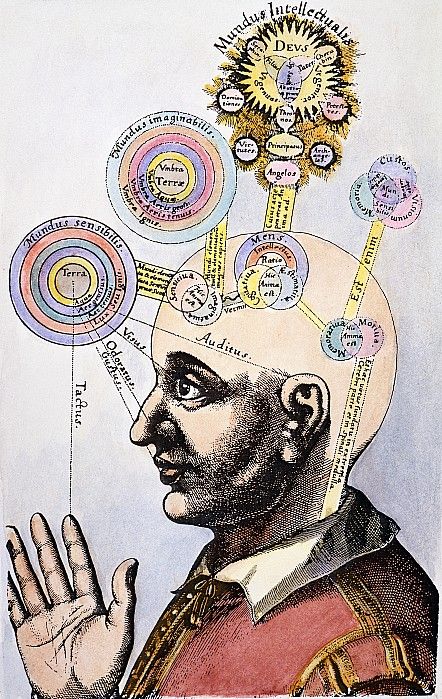 The chambers of the Mysteries

We must begin by distinguishing the adjective "esoteric" from the noun "esotericism". The adjective precedes it and comes from the Greek "esôtirokos", which means "to go inwards". It is opposed to "exoterikos", "towards the outside". The word esotericism is composed of the root eso which means inside and ter which evokes an opposition.

This is the "arcane discipline", the strict distinction between initiates and profane. "Secret" teachings, voluntarily hidden and reserved for certain people. 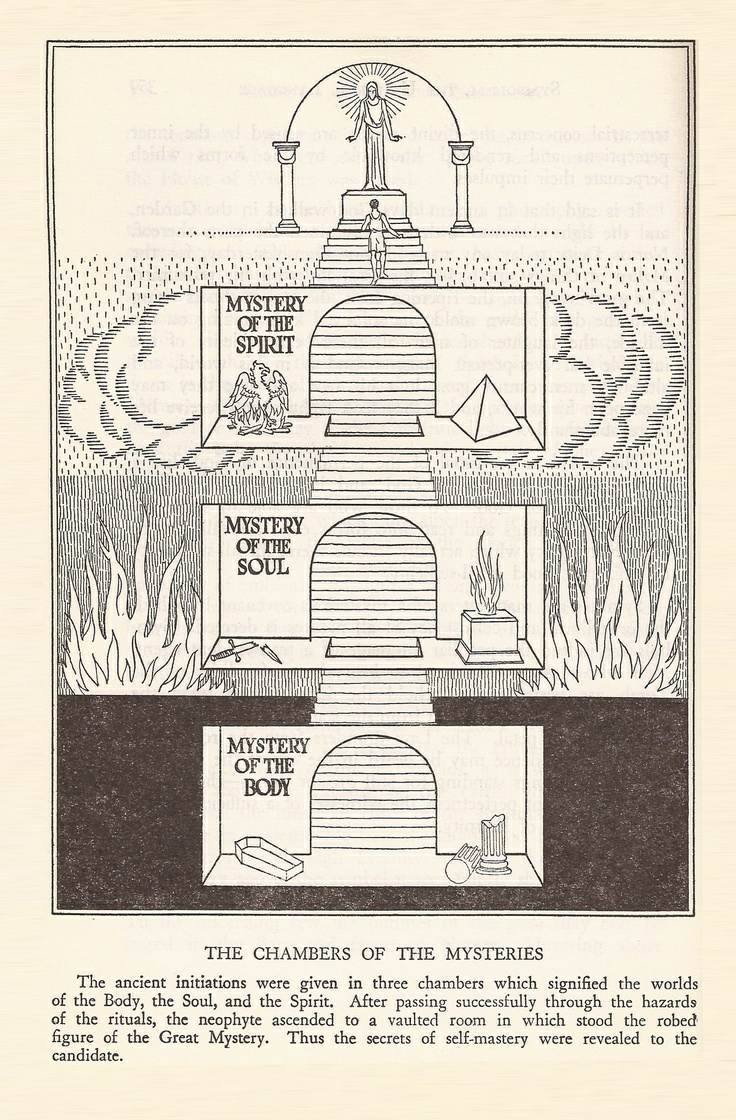 History records that the greatest thinkers of antiquity who were born in the West went on to complete their education in Egyptian mysteries.

The Science taught by the holders of these mysteries is known under different names: Occult Science, Hermeticism, Magic, Esotericism, etc.

Identical in its principles, this code of instruction constitutes the traditional Science, which we generally call: Occultism. […]

The immutable part (of occultism) can be divided into three points:

Etymologically, the term analogy comes from the Greek ana, above, and from logos, speech, reason, reasoning. The analogy is the discourse with the top. The term analogia in Greek also means mathematical proportion.

This term is opposed to analysis comes from the Greek ana, above and lysis, from the ancient Greek luein meaning to release, untie and translate the idea of dissolution.

It is at this moment that man becomes aware of a universe where, as Guénon says in Symbols of Sacred Science :

« All things are linked and correspond to each other to contribute to universal and total harmony, which is like a reflection of the divine unity itself. »

The role of analogy is to provide man with a means to unite with the High, with the Divine. It appears as the science of the link between the up and the down. The key term of analogy could be "like" or "is like" (sicut in Latin).

Matila Ghyka specifies in The Golden Number that the concept of analogy corresponds etymologically to the Greek analogia, and translates the term proportion, as suggested by Vitruvius in his De architectura (25 B.C.).

Analogy allows us to understand the relationship between the part and the whole.

Analogy allows one to rise from the sensible to the intelligible and facilitates the ascent. The prefix ana indicates the idea of a movement from bottom to top, and designates the movement back to the origin.

Analogy is the faculty of intelligence that allows us to establish links. It is the basis of creativity, the principle of which is to establish connections between things that apparently did not have any between them.

The analogy is largely based on ternary law, correspondence theory and the use of symbols. 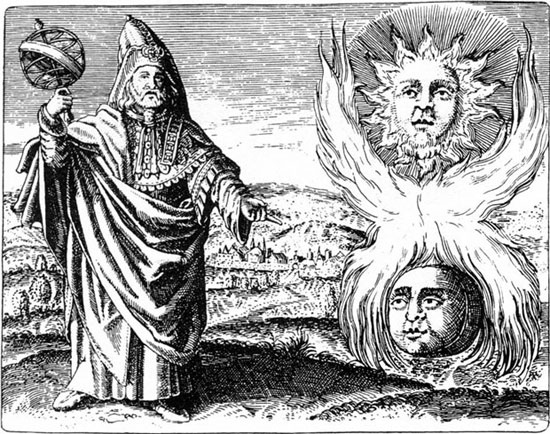 From Philosophy to Psychology

The Three Worlds across traditions

In the Emerald Tablet, Hermes Trismegistus writes : “That which is below (on earth) is like that which is above (in heaven).” If we compare this phrase with the verse from the Our Father, “Your will be done on earth as it is in heaven,” as well as the famous saying “Know yourself”, we can say that Hermes describes something (knowing) while Jesus wishes for it (wanting) and Socrates gives us the procedure to be followed (daring).

On the pediment of the Temple of Delphi it was inscribed, "Know thyself," but few thinkers have understood this precept.

It is believed that to know yourself means to know your character, your weaknesses, your qualities. No, it is something much higher. If it were only about psychology, it would never have been written on a temple!

True knowledge is fusion. To know oneself is to identify oneself, to merge with the Self, that higher Self which is above in the region of the mind, the spiritual world.

This law of analogy, so well formulated by Hermes, is a key that allows us to obtain information about the invisible world from the data of the visible world.

For Initiatic Science there are three worlds:

From numbers to ideas 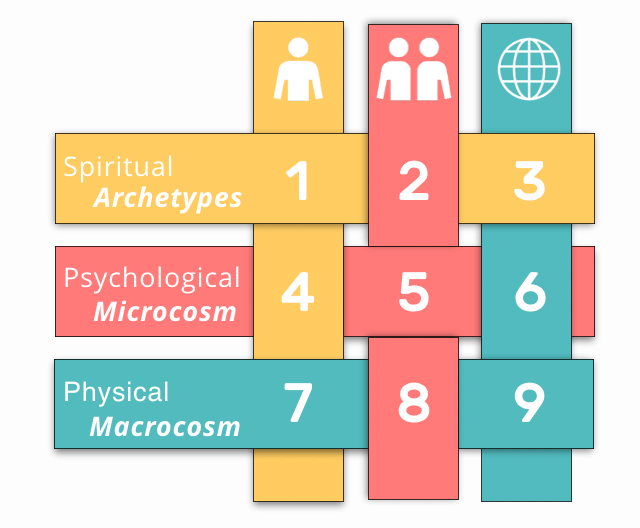 « Nature is a mirror, a vast cryptogram program where vertical series and horizontal strata are ordered and correspond. »

In the following section we will continue the interpretation in a vertical way by trying to define the three propositions or attributes associated with each of the Three Worlds.

This is a kind of Pythagorean table, where the elements of study play the role of numbers, as used by the initiates of the Pythagorean School.

When you have drawn up the tables of several principles, you can move on to an even more interesting exercise: comparing of each of the principles with all its analogues in the other tables.